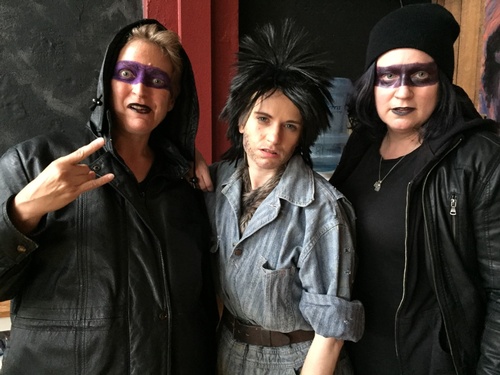 Event Description:
Pier Pressure Productions, located at 1015 Commercial Street, Astoria,is presenting Henceforward, a black comic sci-fi play set in the not-so-far-off future by Alan Ayckbourn, for its Grand Opening on Friday, September 13.  The ribbon cutting ceremony begins at 5:15 p.m., serving champagne until the doors open at 6:45.  The construction of this theater has been a year in the works, under the planning and implementation by Daric Moore and Susi Brown.

Jerome Watkins, an out of work composer, lives in a messy, steel shuttered basement in North London where punks and thugs battle to rule the city.  He has lost his muse. His only companion is a robot nanny who's on the blink. Desperately wanting custody of his teenage daughter, he plans to hire an escort/actress to impress his estranged wife and a wired-for-sound child welfare officer. Things take an unexpected turn: a synthesizer, computer circuitry and a screwdriver-what could possibly go wrong?

You can join the Astoria Warrenton Area Chamber of Commerce as a business, a nonprofit organization or an individual. Learn more about the benefits to you and the community.

Check out some of the hot deals and member to member deals available exclusively to members of the Astoria-Warrenton Area Chamber of Commerce!

Browse or search our directory of more than 600 members.